Much to be thankful for this year 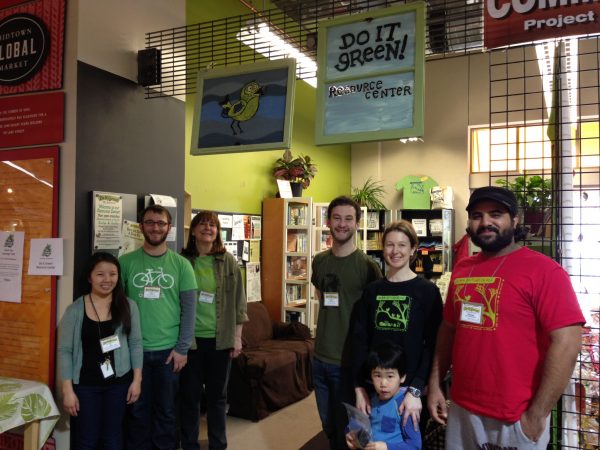 This past weekend, Do It Green! Minnesota hosted our 10 Annual Green Gifts Fair. The Green Gifts Fair is a holiday shopping event that features local, sustainable businesses and include many educational booths on lowering your environmental impacts around the holidays. Despite this emphasis on green living and sustainability, for many visitors the event is primarily a shopping destination. This year, I covered a large pillar in the middle of the fair with craft paper, and wrote the words “What are you thankful for?” on it. What people wrote indicated that despite being out shopping, they were not in a materialistic mindset.

Some people were thankful for broad concepts, including one person who simply wrote “life” on the paper. New opportunities was also offered as an idea, as were our country, good health, God, and church. Several people indicated they were thankful for food, including pizza (a sentiment that I share). Music, books, and the internet also made the list of things to be thankful for this year.

A few people clearly had the environment in mind when they participated, which is probably to be expected at the Green Gifts Fair! Fairgoers were thankful for both monarch butterflies and milkweed- the only plant on which monarchs will lay their eggs. One person was thankful for water, and another for Minnesota’s new seed law, which legalized seed sharing in our state.

In the hustle and bustle of the holiday season, it’s sometimes far too easy to lose sight of what’s really important. I was heartened by the results of my little project, with so many people finding wonderful things to be thankful for this year. What about you? What are you thankful for?

Swapping is a great way to eliminate waste and engage in reuse. Instead of throwing away items that you no longer want, you give them to someone who does, and instead of purchasing brand new items, you can reuse items you receive from others. Swapping can also be a way to provide items to people who cannot afford to purchase them, and it is a wonderful way to meet new people and build a sense of community.
Check out Swapping Made Easy for a full list of tips to hosting your own swap!

Wondering what our state’s capitol city is doing about climate change? The city is committed to making St. Paul “The Most Livable City in America” and a leader in sustainable urban living. To accomplish this, the city concentrates on energy efficiency and conservation, clean energy supply, alternative fuels, transportation options, recycling and waste reduction, and other areas. Find out more here.

Arts and crafts materials can be hazardous to your health and the environment. Even though the Labeling of Hazardous Art Materials Act of 1988 requires stringent labeling of hazardous materials in art supplies, many materials are out of compliance. This article offers tips to help you choose safe art supplies, plus substitutes to harmful substances.

Is it possible for one of the fastest growing cities in Minnesota to be sustainable? The City of Woodbury has committed to try. Since adopting its initial Sustainability Resolution in 2006, the City has progressed toward becoming a sustainable community through several initiatives. You can read more about them in here.  Can your city follow suit?

If your office doesn’t have a recycling program, consider being a catalyst for big change by starting one yourself. See our full list of tips on how to get started (including identifying a Recycling Coordinator and selecting a Recycling Company) in our article, Green Your Office.

Each time we choose to find out the source of our food, we not only learn about our food supply, but we also have the opportunity to make a choice. Turning over a package of food or checking out those little stickers on our apples can open our eyes to the size and scope of the food supply. Gardening, farmer’s markets, food co-ops, and community-supported agriculture (CSA)—all of these food sources are growing stronger with every new gardener, shopper, member-owner and subscriber! Having a personal involvement and connection to our food is part of what has been missing in our convenience- and price-driven diets. And this connection to our food could be what changes our food system.

Check out the full article to learn more!

Check out our full article Green Your Office for more great ideas.

Wait. Scratch that. Don’t make your own list of simple things you can do today to make a positive difference for the climate—use ours! This list offers 20 easy things you can do that will help you and your family lighten your load on the environment, keep more money in your pocket, and inspire you to find even more ways to tread lightly on this earth.

Solar water heating is one of the least publicized but most cost-effective renewable energy options. According to Windy Dankoff of Conergy, solar water heaters capture six times more energy than solar electric at a third the cost.

Community Gardens are community spaces that are communally cultivated and cared for; these spaces may consist of individually-worked plots, multiple person caretaker areas, sitting areas, and small-scale children play areas. Some say community gardens are the last existing opportunity Americans have to reclaim common spaces. This article offers great information about the many benefits community gardens provide.