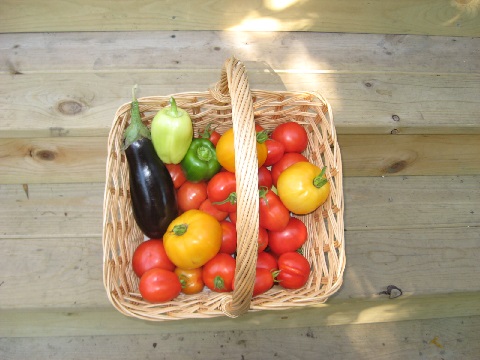 Recently I was enjoying some dried organic apricots, when I noticed that the package stated that the fruit appeared somewhat brown in color because it did not contain any dyes or other ingredients to preserve color.  Indeed, the apricots were a somewhat dull orange-brown color, rather than the lurid orange that I sometimes see in dried fruit loaded with artificial dyes and preservatives, or even the more sedate orange color that I find when ascorbic acid (vitamin C) is used during dehydration.

I wasn’t put off by the color of my apricots; in fact, I was rather pleased to see a food in its natural (or naturally dehydrated) state.  But the fact that the company selling the dried apricots felt they needed to provide a written explanation for why their product appeared in its unaltered state made me a bit sad.  We have reached the point that the average consumer, or even, apparently the average consumer of organic fruit, is no longer expected to know what food really looks like.  So many of the foods on the market are processed, prepared, and packaged to such a degree that they are almost unidentifiable.  Yet those are the products that many people can recognize and identify, rather than foods that are raw or minimally processed.

To make matters worse, even those foods that are still consumed in a mostly unaltered state often remain a mystery to many consumers when it comes to where or how they grow.  How many people know that peanuts grow belowground?  How many would be surprised to learn that pineapples grow on plants smaller than most adults, not on towering trees?  How many people could identify a rice field or know what state produces the most rice in the country?  (It’s Arkansas, by the way.)

While I have some gardening experience and try to purchase whole, minimally processed foods, I know that I am not completely knowledgeable about all the foods that I eat.  For instance, I like artichokes, but I have no idea what an artichoke plant looks like.  Right now, I am going to take a few minutes to learn about artichokes.  I hope you will join me in learning more about our foods.  Pick something you don’t know much about and do a little research.  You’ll have fun, and hopefully you’ll learn something interesting and worthwhile about what you eat.

Environmental change is coming fast to the historic Mississippi River town of Winona. Learn about collaboration at its best in this article. It describes how Winona’s major public institutions—the city, county, Winona State University, and Winona Public Schools—are joining forces to become an ISO 14001 community.

As a constituent, you are your local legislators’ highest priority. Why not share your views with them and ask them to support your position? It may seem like your letters and emails will get lost in a deep, dark political hole, but don’t despair. Whether you call, fax, email or visit in person, this article offers tips on how to effectively communicate with your elected officials and get them to listen.

Swapping is a great way to eliminate waste and engage in reuse. Instead of throwing away items that you no longer want, you give them to someone who does, and instead of purchasing brand new items, you can reuse items you receive from others. Swapping can also be a way to provide items to people who cannot afford to purchase them, and it is a wonderful way to meet new people and build a sense of community.
Check out Swapping Made Easy for a full list of tips to hosting your own swap!

Travelers can generate a lot of waste and pollution, even with the best intentions. But it isn’t hard to make a few changes that can help us avoid a lot of trash and otherwise green up our time away from home. It is our responsibility to take care of the places we inhabit, and to show that we respect the place we are traveling to, that others inhabit.

Check out more tips on reducing waste while traveling!

The average Minnesota family spends over $4,000 on energy (includes natural gas, electricity and gasoline) and produces over 50,000 pounds of carbon dioxide per year. Here are some easy ways to save energy:

Check out our Personal Energy Checklist for more great ideas!

An average child will go through 8-10 diapers a day until the age of 30 months. That’s about 8,000 diapers, and a cost of about $2,500! A good set of 20 cloth diapers will cost an average of $350 and can be used for future children or even resold. Cloth diapers save you money and keep a significant amount of trash out of the landfill or incinerator.

Shoreview Green Community is a group of citizens from the north metro community of Shoreview who are working with the Sierra Club North Star Chapter to make Shoreview a model community for its environmental practices. The group focuses on clean water, efficient resource use, and transportation issues. Learn more about how your community can model Shoreview’s environmental efforts here.